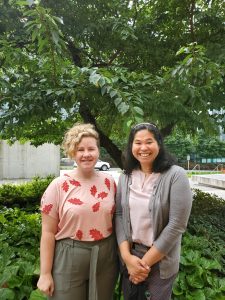 In October 2018, Building Operations embarked on a two-part odyssey to modernize its aging file-server and produce governance documentation supporting records management. While this sort of work is regularly carried out across the university, this particular file-server was special; it had successfully annihilated two previous attempts at modernization. “It had a very bad reputation for crushing hopes and dreams,” says Barbara Towell, E-Records Manager for the university.

“This file-server had a very bad reputation for crushing hopes and dreams,” says Barbara Towell, E-Records Manager for the university.

Three departments (Energy & Water Services; Infrastructure Development; and Building Operations) had accumulated decades of information. “It was a behemoth, consisting of 900 user accounts and 6.7 terabytes of information,” says Pearle Lundeen, Functional Analyst for the project. “The structure had little to no governance built into its folder structures, nor its access permissions. “ To describe the project as challenging is an understatement; but in 2018, something important happened. Building Operations hired a new Managing Director, Greg Scott, who prioritized the work. “He was definitely the catalyst needed to ensure that the project was started and finished,” says Pearle. “The project also benefited from a project manager, business analyst, desk top service analysts, and lots of implementation support. “

The team was in place but the project still faced significant stakeholder engagement. “We had information going back two decades!” says Pearle. Among these three departments and the plethora of information, where did access, ownership, and management begin and end?

“It was a behemoth, consisting of 900 user accounts and 6.7 terabytes of information,” says Pearle Lundeen, Functional Analyst for the project .

“In our third attempt, we executed a strategy created in consultation with the university’s Records Management Office, enabling the three departments represented on the file-server to agree to a common methodology,” says Pearle. We created containers representing high-level business functions in which we established:

Having a simple, structured methodology was key, but more importantly, this strategy made communication with the project stakeholders simple. “After all” says Stephanie Friesen, Records Management Specialist, “these were the people who used the drives daily, and for whom this project represented substantial change. We needed a well laid out structure to give end users confidence in the project. “ Using records management methodology as a baseline for communication, we consulted with over 100 stakeholders across three departments on how to separate the information into discrete drives and come up with an updated and consistent structure across departments.

Third time was the charm! In July 2019, two months ahead of schedule, the project team successfully completed the project. The final statistics are impressive: completed in just six weeks the implementation phase of the project had 8 dedicated migration events, with 51 groups located in 7 different building locations on campus. Best of all, the migrated content is well structured and this project reduced the content in the new drive by 4.3 terabytes!

With the foundation established, Building Operations is going to continue to cultivate a culture of record keeping. “I am looking forward to catching up with Building Operations next year when we look for ways to improve what they have built,” says Barbara. “We want to build on this success,” says Pearle. “Next year, retention schedules, and maybe even fully fledged naming conventions! “